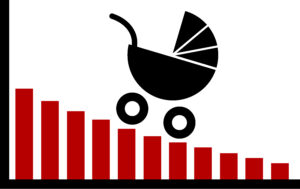 IN EVERY MAJOR CITY OF THE WORLD, THE STORY IS THE SAME.

Roads are clogged, trains are crowded, hospitals are overstretched and suburbs are congested. Humanity’s footprint is becoming denser and we are feeling the crush of an increasingly populated world. Doom-mongers warn that the population explosion could ultimately lead to ecological and societal collapse. But is overpopulation panic justified?

Overpopulation is a hotly debated topic. Environmentalists warn that our planet’s safe carrying capacity was not designed for 7.5 billion people and that this will create food scarcity and water shortages. Economists counter with their own cautionary tale about falling fertility rates leading to more senior citizens and less children resulting in fewer workers supporting additional retirees, declining income tax revenues and reduced economic growth.

Overshadowing the dichotomy of environmental health versus economic health is a provocative prediction – the population of the world is headed for a steep decline. More than half of the world’s population now live in countries where the fertility rate – the average number of babies born per woman – is below the replacement level of 2.1. This means that an increasing number of couples are not having enough children to replace themselves.

Due to falling global birth rates, a growing number of demographers estimate that the planet’s population will peak at around nine billion sometime between 2040 and 2060, and then start to decline. If this is correct, alarmism and extreme measures to combat overpopulation are entirely unnecessary. This is the central assertion of Empty Planet: The Shock of Global Population Decline by Canadian authors, Darrell Bricker and John Ibbitson.

The Canadian duo goes against the grain of conventional wisdom in arguing that world population will peak far lower and sooner than UN forecasts. Their contrarian view is that the world faces a birth dearth in lieu of a population explosion. Thus, the unfolding problem is one of depopulation, not overpopulation. The significance of a contracting global population is laid bare in the book’s preface:

The great defining event of the twenty-first century – one of the great defining events in human history – will occur in three decades, give or take, when the global population starts to decline. Once that decline begins, it will never end. We do not face the challenge of a population bomb but of a population bust – a relentless, generation-after-generation culling of the human herd. Nothing like this has ever happened before.

The authors add that by the end of this century, the planet’s population could be back to where we are right now, and steadily growing fewer. The main driver of declining fertility is urbanisation. As explained by Bricker and Ibbitson: “On a farm, a child is an investment – an extra pair of hands to milk the cow, or shoulders to work the fields. But in a city a child is a liability, just another mouth to feed.”

So, as rural folk escape poverty and nations grow richer, people opt for smaller families – a phenomenon called the fertility transition. Women in cities have more access to education, careers and family planning and these combine to lower rates of childbearing. As noted by the World Bank: “The higher the level of a woman’s educational attainment, the fewer children she is likely to bear.”

The authors note that one solution to a declining population is to import replacements. That’s why Angela Merkel welcomed so many working age refugees into her country in 2015. Germany has an ageing labour force and a declining birth rate and desperately needs an injection of young workers. But Merkel discovered that anti-immigration sentiment is alive and well in Germany – and the same holds true in other nations.

Few contemporary issues are more controversial than immigration. It emerged as a top issue in the 2016 US presidential election campaign. It was a driving force behind Brexit and the desire to restrict entry into the UK. And it has propelled right-wing parties in France and elsewhere that campaign on a “no more immigrants” platform. Around the world, hard nationalist and xenophobic politicians have galvanised support by whipping up fear over immigration.

“As the Brexit referendum revealed,” notes Bricker and Ibbitson, “many Brits want to turn the English Channel into a moat. To combat depopulation, nations must embrace both immigration and multiculturalism. The first is hard. The second, for some, may prove impossible”.

Those who challenge the merits of immigration are often unaware that most advanced economies are heavily reliant on immigrants for labour growth. Japan has ignored this reality to its detriment. Japan allows very few people to immigrate and – as its fertility rate is less than 1.3 children per woman – it has a shrinking labour force. Japan is seen as the canary in the coal mine for assessing how population change affects economic growth.

Japan has been described as a slow-motion disaster with a shrinking pool of taxable citizens and ballooning social welfare costs for an increasing number of elderly. Japan has the highest national debt of any nation in the world (248% of GDP) as a result of its need to stimulate the economy through huge government spending programs. Economists argue that the world is now entering what Japan first experienced back in the 1990s when it suffered a “lost decade” of economic stagnation from which it has not recovered.

Beyond economics, Bricker and Ibbitson claim that population decline will influence the global contest for power.

Population decline will shape the nature of war and peace in the decades ahead, as some nations grapple with the fallout of their shrinking, ageing societies …. The defining geopolitical challenge in the coming decades could involve accommodating and containing an angry, frightened China as it confronts the consequences of its disastrous one-child policy.

Only time will tell if the authors are correct in predicting the looming demographic challenge of global population collapse. My sense is that they are on the money in forecasting that there will be significantly less of us. I have little doubt that my grandchildren will live in an emptier world populated by more grandparents than grandchildren.

Another example of what goes up, must come down!

This site uses Akismet to reduce spam. Learn how your comment data is processed.